Inspired by an actual ABC News Nightline report, Destination Wedding by Jacqueline J. Holness charts four women’s journeys as they discover that love is not an experiment easily confined to a timetable. Candace Bushnell author of Sex and the City says the book is “terrific!” 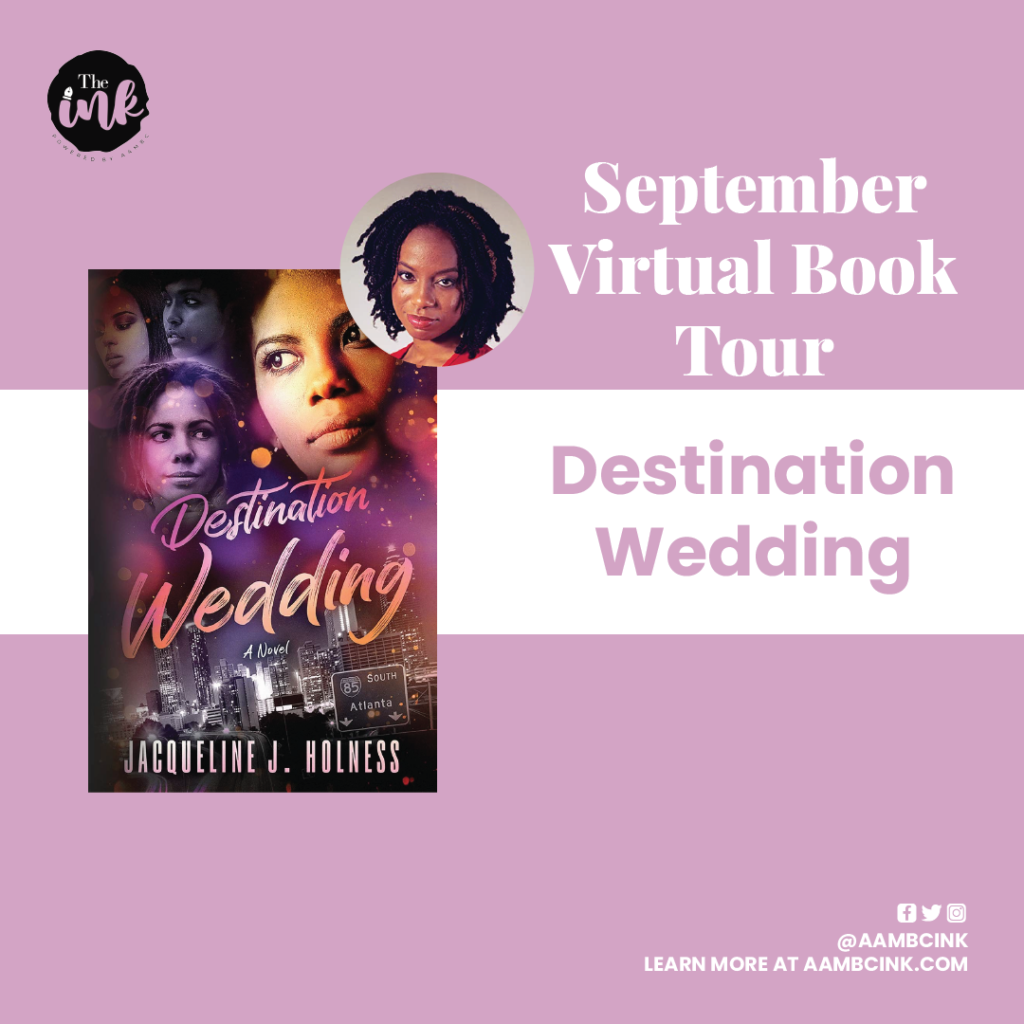 Three successful best friends in Atlanta believe they are thriving in the Black Mecca.
Bossy bank executive Senalda breaks down men from business to bed, no holds barred.
Hip hop PR guru Jarena praises the Lord and pursues married men with equal
persistence. Famous and infamous radio personality Mimi fights with her fans
and for the love of her on-and-off-again boyfriend.

But when an ABC News Nightline report, “Single, Black, Female – and Plenty of Company” asks
why can’t a successful Black woman find a man, the friends are suddenly hyper-aware of their
inclusion in the sad statistic: 42 percent of Black women who have never been married. Like
the women in the report, they are career-driven, beautiful Black women living in Atlanta who
have everything – but a mate. They resolve to defy the statistics by marrying in a year and have
it all by tackling their goal as a project with a vision board, monthly meetings, and more. Project
Destination Wedding is born. A “happily married” best friend Whitney is a project consultant.
But as the deadline ticks closer, the women wonder if they can withstand another year of
looking for love in the media-proclaimed no-man’s land of Atlanta.

Senalda wrests a marriage proposal from the male version of herself, but the proposal
comes simultaneously with a devastating secret. Jarena unleashes hell when her
call to ministry coincides with dating her married college sweetheart. Mimi
faces losing her career and jail time chasing her boyfriend and marries another
man in the process. Whitney’s power couple profile plummets when her husband, a
pornography addict, announces he would rather pursue photography than be an MD.

“See, you need to get out of your own way!” Whitney said. “Lesson #1: If you meet a man who is rich and is hot, what else do you need? Why wouldn’t you date the men that you work with? I mean, how are you going to meet men outside of the music business if you are always working anyway?”

“I tried dating a man in the business ten years ago, and as they say, you don’t need to defecate where you eat,” Jarena said.

“Really? I think the phrase is ‘Don’t shit where you eat,’” Senalda chimed  in. “Damn, you were already a know-it-all. Don’t tell me you’re a no-drink- ing and no-cursing know-it-all now? If that’s the case, you’re in the wrong business.”

“One man! Honey chile, please! You may think you want a man, but you’re not acting like it. Senalda, what’s going on with you, honey bun? Tell me more about this Destination Wedding project.”

Before Senalda was able to respond, they spotted Mimi. Tall and slender with ebony locs nearly to her waist, Mimi was always noticed in any room. And today, she was wearing a black scarf that covered the roots of her locs, black leather pants, and a cutoff black turtleneck sweater that exposed the sliver of her white-chocolate skin between the top of her abdominal muscles and the start of her breasts.

“Have you committed a black-on-black crime?” Whitney quipped with a laugh. “Who are you hiding from?”

“Hey bitches to y’all too,” Mimi said. She moved her locs to one shoulder and sat down.

They all cackled with the resplendent joy of being in the company of all of your best friends at once: a precious rarity as an adult. Mimi and Jarena were friends since their Banneker High School days, Senalda and Whitney since Spelman College, and the four since their early twenties. They’d clicked on their first meeting and hung together as a foursome ever since.

“Well, this is our second Destination Wedding meeting but the first with the old married lady here,” Senalda said to Jarena and Mimi. “I’m just kid- ding. You know you can crash our meetings whenever you want to, Whitney.”

“Well, I did run into Dexter Bailey a couple of weeks ago,” Senalda revealed.

“Dexter Bailey from Morehouse, the Alpha?” Whitney said. “What’s going on with him? I haven’t seen him since we graduated with his cute self.”

“He was living in Miami, but his company transferred him to Atlanta last     month. He’s a VP with UPS.”

“All of those initials I like! So is he married? Divorced? Does he have any kids?” Whitney said, in a flurry as she picked up a menu. “And let’s order too.”

Jacqueline J. Holness is a seasoned journalist with 15 years writing and working for an assortment of newspapers, magazines and websites including Upscale, Christianity Today, The Atlanta Journal Constitution, UrbanFaith.com and her own blog After the Altar Call. In 2012 Written Magazine recognized her as an Emerging Writer for her debut novel Destination Wedding. In 2012 and 2013, she won an Atlanta Association of Black Journalists award for her business reporting with Atlanta Tribune: The Magazine.

Jacqueline has a bachelor’s degree in magazine journalism from the University of Georgia and is a member of Delta Sigma Theta Sorority Incorporated. She resides in the Atlanta, GA area with her husband and currently serves as a correspondent for Courthouse News Service, an online, national news service for attorneys.

1. Your book is inspired by the ABC News Nightline piece that aired in December 2009, “Single, Black, Female and–Plenty of Company”. At the time you saw the on-air special you were a single woman living in Atlanta. How did the report make you feel?

months. And prior to that, I had used many tools in my dating life including but not limited to prayer, self-help books, counseling, online dating and seminars for nearly a decade without any of my dating relationships turned into lasting relationships. It definitely didn’t help that this report aired during the Christmas season, one of the most romantic times of the year. Devastated and despondent is the short answer.

2. What made you publish Destination Wedding a decade later?

Since I’m a journalist by trade and take writing very seriously, it took me about that time to learn how to write a well-developed novel, navigate the twists and turns of the evolving traditional publishing industry and ultimately professionally self-publish Destination Wedding. It was a fortuitous coincidence that when I was ready to self-publish, the 10th anniversary of the airing of the ABC News Nightline report was coming up which made it an opportune time to have a retrospective look at the report and what has happened since.

3. Before you finished the manuscript you met the man who would become your husband— years later. Did you ever consider revising the storyline once you met Mr. Right?

Actually, I started writing the manuscript after I met him so the storyline unfolded as our relationship unfolded. I saw the report in December 2009, and I started dating the man who would become my husband in February 2010. The idea germinated only in my head until I was ready to put pen to paper in March 2013, after we got engaged in December 2012. It was a very organic process. Once I decided on the storyline, I made sure I got much of the rough draft done before I got married so that the manuscript would reflect my single status.

4. Describe a perfect date night for you in Atlanta? or What are some of your favorite spots for date nights in Atlanta?

A perfect date night in Atlanta would start during the day and end at night. I like to be active so it could start by bike riding through Piedmont Park, running the Atlanta BeltLine or strolling through Ponce City Market or the High Museum of Art. I’m also a foodie so if I felt like having an upscale evening then dinner at STK Atlanta would be a top choice afterward. And if I felt like kicking back and just enjoying the weather then the rooftop patio at Six Foot Under Pub & Fish House would be the spot.

5. You have won awards for your non-fiction writing and reporting and you wrote and published After the Altar Call: The Sisters’ Guide to Developing a Personal Relationship With God prior. How did writing this work of fiction challenge you as a writer?

It was very challenging because in journalism, you have to be succinct and in fiction, you have to be expansive in your writing. However, since I’ve wanted to be a writer for as long as I can remember, I welcomed the challenge and was willing to write several drafts over the course of years.

6. The audiobook of Destination Wedding features actresses Tracy Conyer Lee (Jarena), Shari Peele (Senalda), Jasmin Walker (Mimi) and Lynette Freeman (Whitney). Should your novel be optioned for screen adaption, who would you like to play your lead characters?

When I first started writing, I envisioned Tempestt Bledsoe as Jarena, Malinda Williams as Senalda, Goapele as Mimi and Essence Atkins at Whitney, but since that was several years ago, I guess I would be forced to envision younger actresses.

7. You have a strong spiritual foundation in God. How much of a role do you believe your faith has played in your journey from single to happily married?

My faith is the foundation of who I am, but I firmly believe that faith and action must work together. I did not just sit on my hands and pray for God to send my husband to my front door. I got “out there” and dated, which I highly recommend. And even though it was an emotional rollercoaster, in the end, all of the highs and lows were worth it because I grew as a person.

8. What words of encouragement would you like to offer to black career-driven single women who still desire to find their life partner?

I would say use all of your skills that you used to succeed in your professional life to succeed in your personal life. But at the same time, be open to the fact that meeting your goals in your personal life is typically not a linear process as it is in your professional life. I think you can meet and marry a man in a year, but it may not be the same year that you set that goal for yourself. It  may take a few years of growth before your year comes to fruition.

Jacqueline J. Holness may be contacted by email at [email protected].